This is one of my favorite eLearning adventures. I had too much fun designing and developing the Gemini VIII Learning Kiosk for the Armstrong Air & Space Museum.

As a huge fan of the space program, having the opportunity to tell the story of the Gemini VIII mission, from its first docking to its life-threatening emergency, was an amazing experience. The following covers all the ins-and-outs of the development process, including my needs analysis, instructional, design, and development approaches – all the things that bring this project to life for the museum’s many visitors.

On March 16, 1966, two spacecraft launched into space. The unmanned Agena and the Gemini VIII spacecraft, with astronauts Neil Armstrong and David Scott.

This marked the first mission each had in space. The mission involved a rendezvous and historic first docking. Docking had never occured in space before and was necessary to go to the Moon during the future Apollo missions.

About 45 minutes after docking, the astronauts noticed the spacecraft began a slight roll and wobble, which was only increasing. They undocked from the Agena, in case it was the cause, but found themselves rolling faster and faster. It was their own spacecraft, Gemini VIII, that had a problem. They were now rolling a full revolution every second. Their vision was blurring, they were losing their orientation, and were nearly blacking out.

They worked through the life-threatening emergency, problem-solving the way astronauts know how. On top of it all, they were in a communications blackout zone and couldn’t communicate with Earth, so it was all on them. Neil engaged the secondary re-entry control system thrusters, hoping to counter the roll. After a burn of the thrusters, this maneuver successfully slowed down and stopped the roll, taking them out of immediate danger.

They determined a single thruster had stuck in the open position, causing constant thrust and the roll. Armstrong and Scott came home two days early, successfully splashing down in the Pacific on March 17, 1966. They both went on to walk on the Moon. 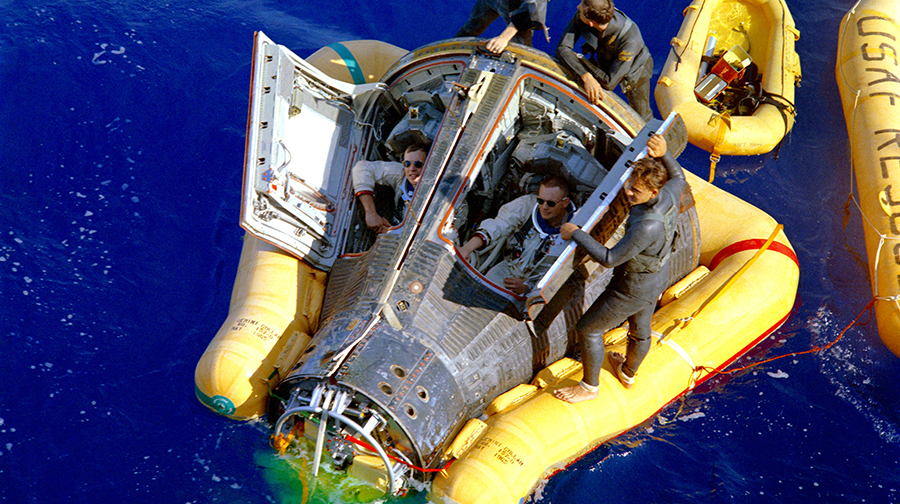 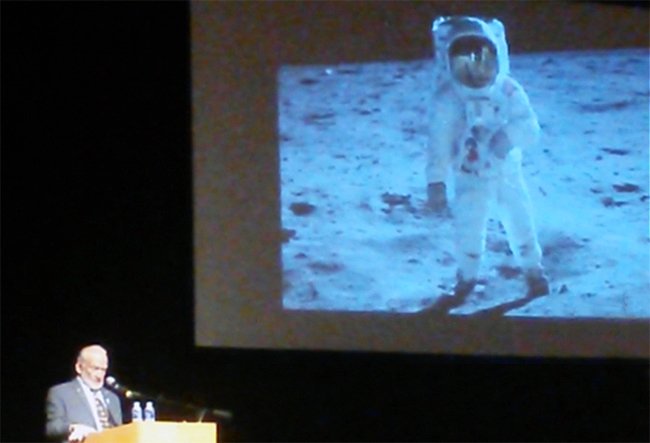 My wife, Sarah, and I spent the day in Wapakoneta, Ohio, Neil Armstrong’s boyhood hometown, to visit the Armstrong Air & Space Museum and attend a presentation by Buzz Aldrin. Buzz, the first man to land on the Moon with Neil, told us about his trip and first steps on the Moon. Amazing.

Before the presentation, we toured the museum. It was all things Armstrong and all things space. It is jam-packed but its centerpiece is the original Gemini VIII spacecraft.

As we rounded the spacecraft, I wanted to find out more about it. The museum didn’t have a lot of details on the mission. There were no details about the docking or the emergency, which I knew a little about. I did a mini-needs analysis in my head (I will talk more about this shortly) and thought that an educational kiosk would compliment the spacecraft nicely.

Once home, I developed a prototype in Storyline and managed to get in contact with the museum to ask what they thought of the idea. Luckily, they thought it was in perfect alignment with several updates they were making to the museum’s exhibits and the addition of a brand new classroom that would be built. It also aligned with the upcoming 50th anniversary of the first Moon landing on July 20th, 2019. 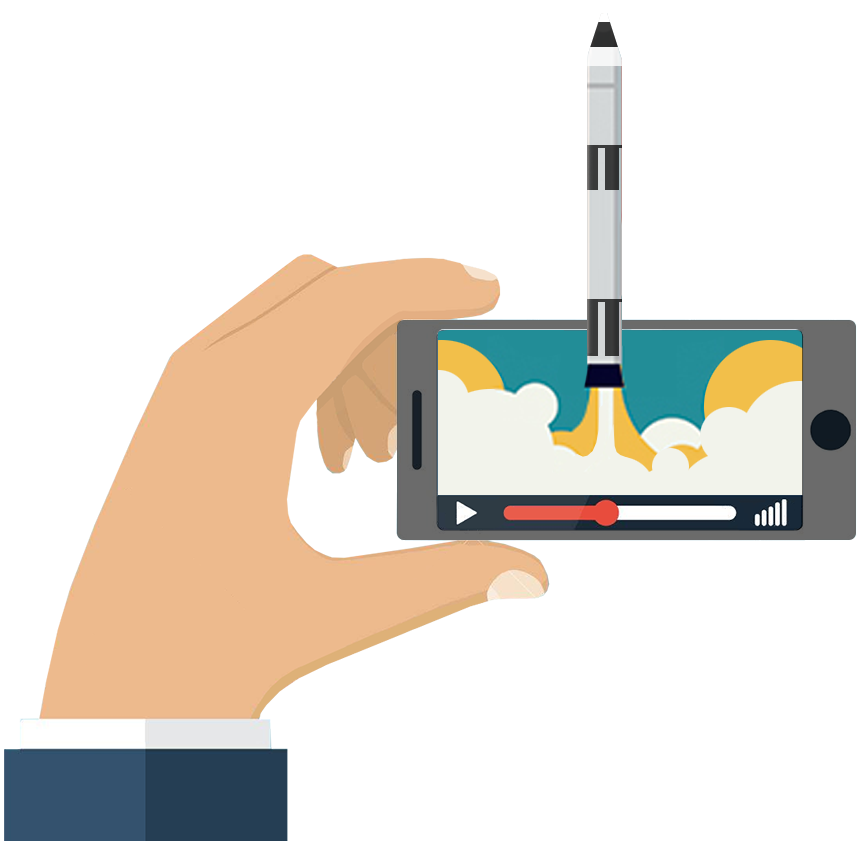 I build prototypes when I either need to work out the experience for myself or I need to present the experience to someone else. I typically like to use a screen recording program like Camtasia to record myself clicking through the prototype and I record my voice to narrate the experience. This allows:

This is great for your samples too. With a video sample, you can get right to the point, where a link might take the user some time to find that knowledge check or area you really want to show off. That said, sometimes it makes the most sense to let your client or stakeholder interact with your project directly. It’s a judgment call but consider all options.

Luckily, my initial mini needs assessment was on the mark. Brittany and Greg, from the Armstrong Museum, and whom I was working with on this project, helped me further analyze the need for additional education.

We didn’t have any required performance goals to meet, but wanted to provide visitors with the opportunity to reach a number of educational goals. The museum would occasionally have a staff member stand near the capsule and provide information, so they had a lot of knowledge about visitor’s interest and questions they ask (at all ages). Here is a breakdown of the needs as we saw them:

Goal: Provide a mechanism for visitors to become educated on the Gemini VIII mission.

The museum often talks to visitors about the first docking and emergency. Visitors had difficulty visualizing how the docking took place and how the capsule rolled and wobbled during the emergency. I had taken a little 3D animation in college, and while I don’t develop 3D myself anymore, I always consider where it might be useful. I thought it could be used to illustrate the entire emergency from start to finish. Tony O’Dell, my friend and 3D animation guru, brainstormed ways to incorporate 3D animation into the project so the visitors could visualize the situation accurately. The animation could then be repurposed for use by the museum staff as a visual aid for other needs.

Goal: Provide ways for visitors to visualize the first docking and emergency.

The mission produced an assortment of images and videos covering the liftoff of both rockets, elements of the mission in space, the astronauts, recovery, and ground control. There was no mechanism to make all this media available to the visitors, they could only look at the spacecraft and move on. With a kiosk sitting next to the capsule, we would have the mechanism we need to allow visitors direct access to these amazing assets.

Goal: Create a kiosk right next to the spacecraft that could provide all the mission information, video, and other assets.

I like to begin a project by considering what kind of user experience is most advantageous to the information I am trying to educate or train someone on. This isn’t just the visual design of the project, how the navigation acts, or the instructional approach. It is how all these elements work together to create a cohesive learning experience for the user.

This is for a museum exhibit directed towards all kinds of visitors with varying interests. Ages range from approximately 5 to 100. Some visitors will want to explore the entirety of the kiosk, others have distinct questions they want to be answered, and some may just want to see the videos and images and relate them to the actual spacecraft in front of them.

Here is a snippet of my thought process regarding the experience I believed would fit the project needs:

By first defining the user experience, I have goals and a direction to build out the user interface design. I don’t typically like complex user interface designs. The less they see in a design, the more they see in terms of content. The capsule has many angles to it and so I use an angled line to subdivide the design between images, videos, and text. I ran all my designs by my friend Joe who reviewed the project for inconsistencies and provided a number of design considerations. I highly recommend showing your designs to others and take in the feedback they provide. It will lead you to produce much better eLearning experiences. 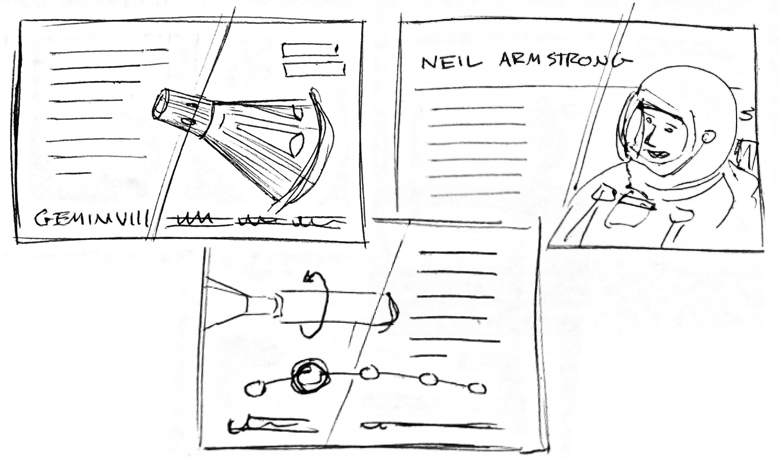 Chris, Brittany, and Greg, at the museum, worked with me to define the most important categories and subcategories to cover on the kiosk. This was based on the information they have documented and the typical interest and questions they have from visitors. I put together a storyboard template with instructional and design considerations, so they could fill in the details and note any images/videos that they know exist. This was incredibly helpful to me during my development process. These individuals know so much about the mission and how to relate that information to the visitors they have. As they populated this, I continued working on user interface design concepts. 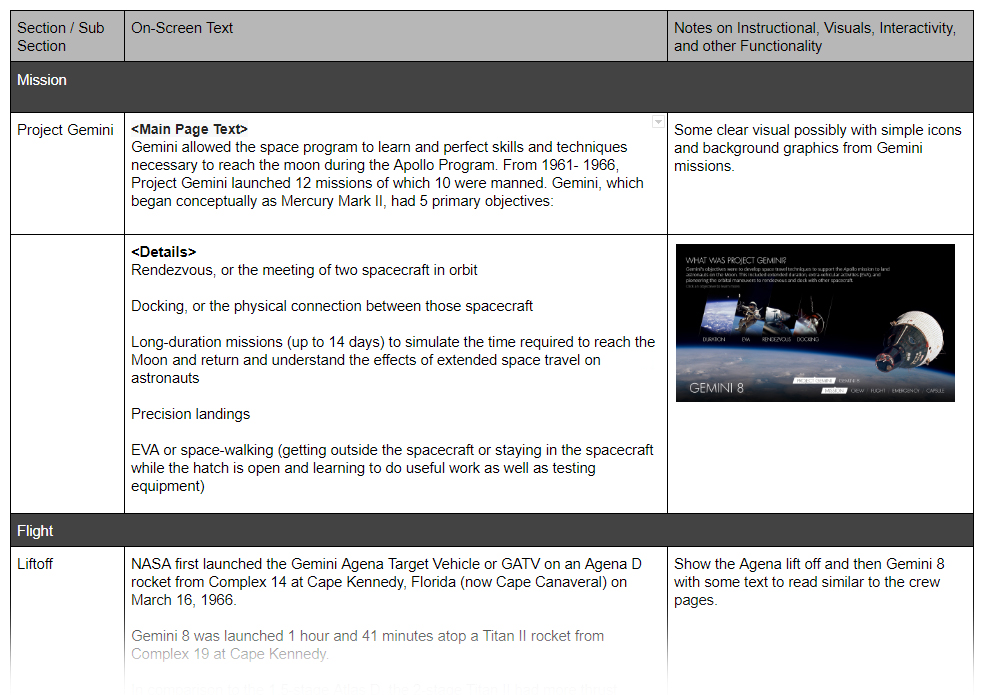 Tony worked with me to develop the 3D animation used to visualize the emergency. Greg, from the museum, provided a detailed description of the emergency, the orientation of the spacecraft as it rolled out of control, and even snippets from the Gemini manual to help with our accuracy.  We used 3D Studio Max to output the animation and then Adobe After Effects to edit and handle color correction.

Because I did not live far from the museum, I occasionally stopped by for face-to-face meetings with the museum staff. My trips had several goals: 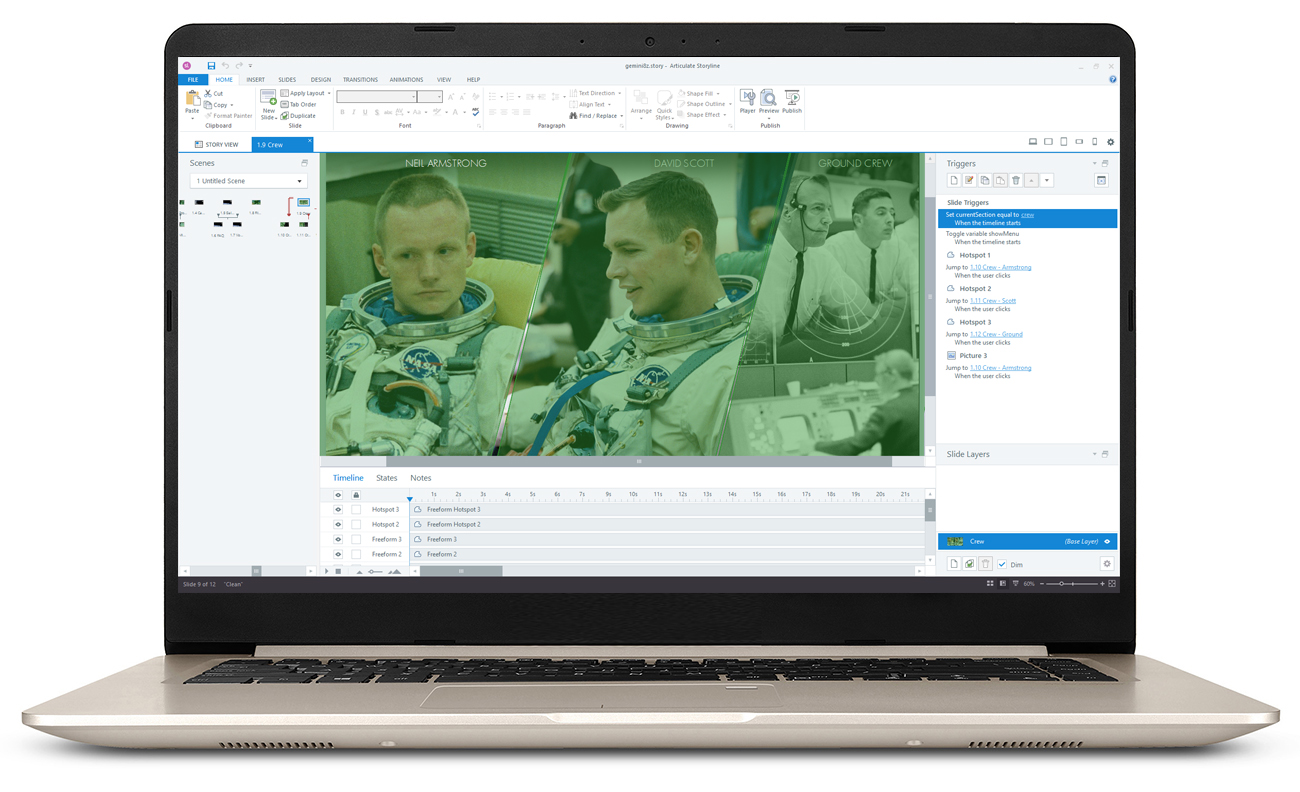 I have so far created the design. So I know what this is going to look like and have all the content written. Now I need to develop it.

I chose to develop this in Articulate Storyline, because:

I had to be inventive about how to structure this project in Storyline. Here are a few things that are somewhat novel in this project:

I will be creating a few videos showing how I created elements of this project in Storyline. Stay tuned!

The museum staff is always talking to their visitors and gathering information on their museum experience. This allows them to understand where they were engaged and their increase in knowledge. The kiosk has had great results from visitors and even special guests, such as Mark Armstrong, Neil Armstrong’s son, who has approved!

As the museum has just enabled WiFi that reaches this location in the museum, we will begin to gather data on what screens/information everyone interacts with so we can expand on the most used areas.

I have also had the opportunity to people watch at the museum. Kids and adults confidently walk up to the kiosk and began interacting. I saw kids using it by themselves and then peering into the spacecraft. I saw parents reading to their kids what they discovered (some pretending they knew all this information before). I saw adults spend a substantial amount of time reading and watching videos on the kiosk then looking up at the spacecraft, back down at the kiosk, back up to the spacecraft…I could have watched it all day. I am grateful to have had this opportunity to provide this educational experience covering such an interesting and amazing episode in our space program.

And the kiosk just won a Brandon Hall Award for eLearning Excellence – Best Advance in Custom Content! More on this soon.

Check out this eLearning adventure:

Connect with me to discuss your eLearning project. Or check out the other areas of my site.